Most of us have interesting little quotes attached to our Outlook (or Lotus) auto-signatures. These can be spiritual in nature, thought provoking, or even a little sarcastic. I like the snarky ones the best. I also like those that weave some kind of message that relates to what the sender does for a living, so I look for ones that evoke a little emphasis on value analysis. I used to use this one:

“Fast is fine but accuracy is everything." – Wyatt Earp.

The point of this little anecdote was to remind whomever I was corresponding with that my profession of value analysis is based in logic, not emotion. Thoughtful contemplation of pros and cons, not Tourette’s Syndrome. When we make decisions, we use evidence and give attentive consideration to alternatives. Knee-jerk reactions are usually regretted and often cause more workarounds than was intended. As I frequently preach to my more emotional colleagues, I work with Math not English. Your opinion is nice to know, but we don’t base our decisions on opinions. We want data, randomized-controlled trials, published evidence, P-values…Math. I’ve thought about changing my quote to:

“There are 3 kinds of people, those who get Math and those who don’t.”

I wonder how many folks would get the joke? Anyway, that’s probably not work-related enough. My intention with the Wyatt Earp quote was probably missed by most folks and people just thought it was strange that I quoted a gunfighter when sending them an e-mail about collaboration. 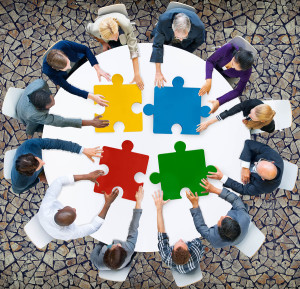 Collaboration is what I really enjoy. As a result of age, experience, or luck, I’ve become much less interested in getting credit for success and take great pride in watching a new nurse come up with an idea to solve a problem or a paramedic design a new workflow to alter supply utilization. Positive change doesn’t have to be driven by me and is actually more effective if I’m supporting ideas generated by others, like our value analysis teams, than if I’m tooting my own horn. As a result, I’ve become more interested in reinforcing the collaboration and teamwork concept. So it was time to change my auto-signature. I thought about:

It’s good and partly conveys what I was after. I’m not sure where it actually started, but if you believe Google (and who doesn’t?) it was either Kenneth Blanchard or a Japanese proverb. My money’s on the Japanese. Anyway, it wasn’t quite enough. More than just collaboration, I wanted to inject the idea that true collaboration isn’t about brainstorming. Brainstorming is where everyone tosses out ideas as they pop into their heads. Someone writes these ideas on a whiteboard or yellow stickies and then it all gets sorted out later. Nice idea, but most folks don’t realize it’s actually pretty exclusionary. Brainstorming is for extroverts. They are naturals at it. Ask them to blurt out whatever pops into their heads and they’ll respond, “I always do that.” We know. Introverts don’t do that. They actually use that filter between their brains and their mouths, sometimes to their own detriment. Introverts think before speaking. Sometimes they’ll ruminate on a topic for a considerable length of time before tossing it out to the group. If brainstorming is your technique for idea generation, you’re missing input from about half of your audience. To avoid this extrovert domination, I try to:

“Remember to grease the non-squeaky wheels.”

I like how that sounds, but it makes for a weird auto-signature. I want to truly be inclusive and give the quieter folks a voice. I also want them to enjoy the value analysis process. Extroverts can be energized by chaotic brainstorming sessions where everyone is talking at once. Introverts are exhausted by them. How about:

“The early bird gets the worm, but the second mouse gets the cheese.”

Maybe that’s a bit too graphic. It conveys my desire to support methodical decision-making, rather than video game twitchiness, but I’d probably regret having that go to my CEO. Then again, there’s Franklin D. Roosevelt:

Again, probably too much and too abstract. I realized that I was really after a signal to the more aggressive folks that they should pay attention to the quieter folks before making decisions. The point I wanted to convey is that value analysis is not just about people fighting for their place in line, jockeying for position to be the next on the agenda. It’s also not about putting out fires. I have a sign in my office:

“There are no value analysis emergencies. If you need my help immediately, you’ve probably planned poorly.”

While I like that enough to hang in my office, I probably shouldn’t have it on all of my correspondences. Sometimes it takes a bit of explanation. I wanted our value analysis program, and my auto-signature by extension, to convey a sense of inclusiveness and an eclectic breadth of ideas and opinions. In order to do that, I have to make sure we aren’t alienating the softer members of our committees. I used to say to an old boss:

“If you say red and I say blue, then you raise your voice and say RED! That won’t make you right, it just makes you loud.”

While this was fun, kind of like poking a bear to watch him growl, and it was accurate because he was an extreme extrovert, it’s not a great tag line for my emails either. It sounds too defensive. (Although I like the attitude it conveys.) I’ve also always liked Stephen R. Covey’s take on the prayer of Saint Francis of Assisi:

“Seek first to understand, then to be understood.”

It kind of tells people to shut up and listen, but very nicely. However, I wanted to avoid religious quotes. Additionally, I wanted to foster the idea of having different opinions, being the devil’s advocate, thinking out of the box, etc. I wanted folks to know it’s okay to disagree and not go along with the herd. Here’s a great quote by General George Patton:

“If everyone is thinking alike, someone isn’t thinking.” 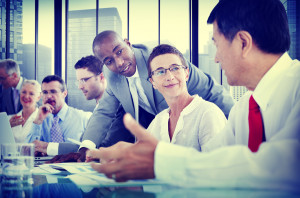 It almost works, but I don’t want to encourage dissension, just true collaboration. I want to impart that value analysis is comprehensive and welcoming of different thoughts, but once a decision is made we’re a united front. We can’t have a committee decide to convert to new IV catheters and have members go back to their areas saying, “I didn’t want these new things and you’re going to hate them, but those value analysis people say we have to convert because the new ones are cheaper.” That kind of sabotage is poisonous to a process and I want folks to take some responsibility for being leaders (no matter what their role in the organization). We can (politely) argue, fuss, and fight in the committee…but when we collectively make a decision, we all stand behind it. If we can’t agree to do that, we disband the committee as it will be a waste of time and could do more harm than good. If it turns out to be the wrong decision, we own up to it collectively, without anyone saying, “I told you this wouldn’t work,” and we move on. That’s what professional leaders do.

Leadership…huh. Essential to leadership is communication. If I get back on my introverted high-horse, communication isn’t just about talking, it’s about using your ears at least as much as your mouth. So here’s what I settled on; it’s not a quote, I made it up myself.

“When asked about their communication skills, most leaders will say, “Of course! I’m great at explaining things and getting my point across.” Unfortunately, that wasn’t the question. At least half of skilled communication is practiced listening. Waiting for your turn to talk isn’t the same thing.”

It’s way too wordy and a bit snarky, but no one’s been offended yet. I’ll probably change it again soon because of its length. But, it’s better than my fallback:

“I can explain it to you, but I can’t understand it for you.”

Is all of this too much to expect from a quote attached to an auto-signature? I decided to share my decision-making process with one of my more extroverted colleagues to see if I’d accomplished what I’d set out to do. She said, “What are you talking about?” I explained that it’s that little quote you sometimes see at the end of people’s emails, after their contact information. They use it to convey a message they feel is important. She said, “Oh, I never read those things. I have too much work to do.”

Jim Russell is a Value Analysis Facilitator UF Health at Jacksonville and has more than 25 years of nursing experience, specializing in critical care and psychiatry. He has been a Staff Nurse, Charge Nurse, Clinical Coordinator, Nurse Manager, Director, and Chief Nursing Officer. He worked for many years in the for-profit community healthcare sector and also has several  Academic Medical Centers on his resume. Jim sat for 5 years on the Nursing Advisory Board for a HealthTrust, performing Value Analysis for nursing related products and represented more than 70 hospitals. He is currently on several Advisory Councils and Special Interest Groups for UHC and Novation. When not at work, he can be found rolling around with his  hyperactive rescue Husky. You can contact Russell with your questions or comments at James.Russell@jax.ufl.edu.

Are You Asking the Right Questions?

May 8, 2019 Robert Yokl Value Analysis Comments Off on Are You Asking the Right Questions?

Robert T. Yokl, President/CEO, SVAH Solutions Value Analysis Selling™ is all about asking the right questions, such as, what are the required functions (primary, secondary and aesthetic) for the product, service or technology under study? […]

Robert T. Yokl, President/CEO, SVAH Solutions “Coming together is a beginning, keeping together is progress, and working together is success.” Henry Ford All winning teams are a combination of attitudes, talents, and traits matched with […]

By Robert W. Yokl, Sr. VP, Supply Chain & Value Analysis — SVAH Solutions Since hospitals have been asked to temporarily shut down primary revenue sources of their operations, such as major elective surgeries, they […]